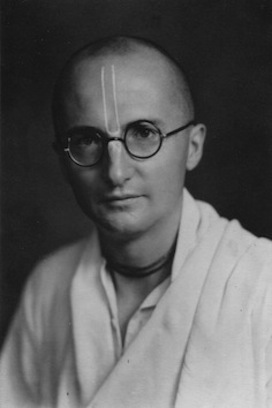 Only today I have managed to answer your letter. I couldn’t do it before. Thank you very much for your letter.

No, You don’t have to worry. Nothing will happen to you. You are under no restraint whatsoever. As you are now – in this very moment – it is fine. You don’t have to nurture the will to force yourself to reach any goal, nor to fight against an “evil force”. Many people forget that there is one force which has got two aspects only [yogamaya and mahamaya], just like a magnet has got two poles – or one power, which sometimes works in one way and sometimes in the opposite way.

Shraddha cannot be forced. Shraddha comes spontaneously, when one listens to the Words about Bhagavan and His lila, and listens to much, very much, as one has to know who He is, and not until then shraddha may develop. You have all heard far too little about Him – then, where should true shraddha come from?

Many things have been put into your head and you have been tied up in activities which demanded too much of you. If someone says that a lady has reached the level of bhava [rati, the red light of dawn of premabhakti], it is stupid and irresponsible. I would like to see the person, who has at least the fourth characteristic of bhava: “In spite of having attained a high level, one is fully unaware of it.”

Sattvika-bhavas or symptoms of raptures, ecstasies? Do you know that Bhakti-Rasamrta-Sindhu says that such apparent bhavas can arise in a quivering, senile heart which has never been touched by bhakti, or in a slippery heart in favour of sentimentality, a greasy heart, or that such bhavas can be generated habitually […] in a kind of group hysteria or in order to be regarded as an  advanced bhakta?

My teacher and other true vaishnavas simply abandoned such hypocrites and chastised them as aparadhis, by disregard. Could there be anything worse than to pose as a bhakta and in this way receive honour and admiration?

So, please, don’t think that others are already so advanced and you are so behind – that’s all nonsense. One can only wish to be, what one really is – and to have the courage to do so – that’s very rare. The “bhaktas” we meet in India or here (?), try to adopt, creep into a way of living and thinking similar to the inflexible, lifeless form of a larva, in order to feel safe there, and in this way they want to possess the “consciousness” of a metaphysical safety of existence, which is nothing but cowardice and self-deception and deception of others.

And even if you personally should hanker after mukti – what does it matter? Each mantra, even the mahamantra can bestow mukti, but it can bestow much more than that. Not a single Shastram has ever proclaimed that the longing for mukti is bad, only that there are more exquisite goals and that those who yearn for pure bhakti are not at all interested in mukti. What about God’s variety, the different paths towards Him and the different ways in which He loves the atmas, if there were no jnanis, karmis etc.!

The ISKCON-lads talk disdainfully about other paths and in India there are idiots who disregard Shiva, Rama etc. Do these fools forget that Caitanya Mahaprabhu on His pilgrimage through India visited all the temples of Shiva, Kali and Durga and lovingly worshipped all forms of God? It is a matter of „taratamyam” – a comparatively greater or lesser intensity and extensity, but no depreciation. This is the teaching of the Shastrams, and everyone who honestly follows one path deserves our respect, even the person who doesn’t follow any path, as long as he is honest with himself and others. Whoever doubts this, just has to look it up in the Gita, that the Paramatma Himself supports everyone and every genuine shraddha, even if it is a detour. Every form of enslavement of a living being is a crime. If Krishna wished that everybody should be a Krishnabhakta, then He, as the Paramatma, could easily turn on a switch, so that each and every atma voluntarily aimed at bhakti, without any noticable constraint.

If someone thinks that the wild sow Kunigunde, who happily grunting grubs about in the mud, is inferior to the nightingale who warbles it’s songs out into the sky with swollen breast, then it’s all my or your individual opinion, but it  would be worse if the wild sow would pose as a nightingale.

It is just nonsense if someone rattles off the Names of Krishna without knowing who Krishna really is. Only an avatara can bestow shakti upon a jiva to get immediate realization, i.e. to immediately understand the nature and the mutual relations between God, jiva and maya [sambandha-jnanam] and to repeat His Names without misunderstanding.

So, dear Haripriya Dasi, let us agree upon this: no desperate efforts, no wish to be something – whatever it might be – no thinking, one has to be this or that or not be this or that. We are not far from God, at all. The atma is never disjunct from God – he just thinks he were existing separately – and God is very, very close, as our dear Friend, and He doesn’t want us to torment ourselves, but feel that we are never disjoined from Him. It is sufficient when we just honestly are what we are. We may try to cheat others or ourselves, but God?

Please, take heart, be someone, who senses that Hari is close to her atma and that the atma is dear to Him (priya), as He sees him unveiled.

This is the first letter I write with difficulties – I still have got fever and high blood pressure, but today I had some peace here and felt, I should let you know how I see the problems you unnecessarily are tormenting yourself with more than enough.

May Hari guide you,