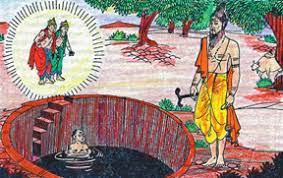 The great ācārya Āyodadhaumya Muni had a disciple named Upamanyu. He once instructed Upamanyu to take the cows out to graze every day and return to the āśrama with them at sunset. So, following the order of his guru, Upamanyu used to protect his guru’s cows and take them out to graze every day, and when he returned at sunset, he would offer prostratedobeisances to his gurudevaand then sit before him with folded hands.

One day, seeing that Upamanyu was very healthy, his gurudeva asked him, “O my son Upamanyu, you are becoming very healthy and strong. What have you been eating every day?”

“O Gurudeva,” Upamanyu replied, “I have been maintaining myself by begging alms.”

“Listen carefully,” said the ācārya. “It is quite improper for you to accept anything you collect as alms without my knowledge or permission.”

So from that day on, heeding his guru’s order, Upamanyu began offering any grains he collected as alms to his gurudeva, but the ācāryawould always take all the alms without giving anything to Upamanyu.

One day, as usual, Upamanyu returned with the cows at dusk and offered obeisances to his gurudeva. But when the ācāryasaw that his disciple was still very healthy looking and actually quite strong, he asked him, “O my son, I take all the food you beg, without giving anything to you, but still, I see that you look so healthy. What do you eat?”

“O my lord,” Upamanyu replied, “after I give all the alms I have collected to you, I go out begging a second time so that I can eat a few handfuls of food.”

“Just see!” exclaimed the ācārya, “this behaviour is not dharmic for a gentleman, nor is it a proper action for him. By this you are depriving other beggars of their lot. Furthermore, by this act you will gradually become very greedy.

Upamanyu took the instruction of his guru on his head and continued grazing his guru’scows every day.

Then one day, when Upamanya returned from cow grazing at dusk and offered obeisances to his guru, the ācāryaagain asked, “O my son Upamanyu, I take all the alms you collect as you wander here and there, and I have forbidden you to collect separately for yourself, yet you look even healthier than before! What are you eating these days?”

“I have been maintaining my life by drinking cow’s milk,” Upamanyu replied.

“But I never gave you permission to take any milk,” the ācāryaexclaimed. “You have done a great injustice by doing so.”

At this, Upamanyu begged his guru for forgiveness, and continued his service of taking the cows out to graze everyday. Some days later, when Upamanyu returned from cow grazing and prostrated before his gurudeva, the ācāryaagain asked,

“Upamanyu my son, you give all the alms you collect to me without eating any of it. You never go out a second time to collect for yourself, and I have forbidden you to take cow’s milk. How is it that you still look so healthy? What are you eating now?”

“After the calves drink milk from their mothers’ udders, I collect the foam that has seeped out of their mouths,” explained Upamanyu.

“The calves are very peaceful. In order to show you some mercy, they do not drink all the milk they need, but rather leave some for you on their mouths in the form of foam. You are stealing their food. Do not do this anymore.”

Upamanyu took the instruction of śrī gurdeva on his head and continued his guru-sevā.

One day while grazing the cows, Upamanyu became extremely hungry and thirsty. He did not know what to do. If he failed to somehow maintain his life, he would be abandoning his service to his guru. Thinking this way, he ate some ākanda leaves (calotropis gigantea), not realizing they were extremely poisonous.

Almost immediately he became completely blind. Alone and unable to see, Upamanyu wandered about helplessly until he fell into a well.

Meanwhile, when dusk came and went and Upamanyu had still not returned, the ācāryabecame worried. He told his other disciples, “I ordered Upamanyu not to eat any type of food. Now I am worried that he has become too malnourished to return.”

Saying this, the ācārya took several of his disciples and entered the forest to look for Upamanyu, loudly calling his name as they searched. When they came near the well, Upamanyu heard the calls of the ācārya. In a loud voice, but with abundant humility, he narrated the story of how he came to be at the bottom of a well.”

When the ācāryaheard of Upamanyu’s condition, he told him to offer prayers of eulogy to the twin Aṣvinī Kumāras, the doctors of the demigods, and informed him that the disease that had blinded him could be cured by their mercy.

The Āṣvinī Kumāras were very satisfied with Upamanyu’s prayers. They appeared before him and offered him a small cake to eat, explaining that it would cure the disease that had blinded him.

Upamanyu replied, “I cannot take this cake without first offering it to Śrīla Gurudeva and receiving his permission.”

The twin Āṣvinī Kumāras said, “Previously, your gurudeva also offered prayers of eulogy to us. We were very pleased with him at that time and therefore gave him a cake. He ate that cake without the permission of his guru, so, as his disciple, you should act just as your ācāryadid. You should also take this cake and eat it.”

Upamanyu folded his hands and spoke to the Āṣvinī Kumāras, “I humbly request you, please do not ask me to eat this cake without first offering it to Śrīla Gurudeva.”

The Āṣvinī Kumāras were so pleased to see Upamanyu’s intense guru-bhakti. Theysaid, “You will regain your vision and you will also attain supreme auspiciousness.”

Upamanyu immediately regained his sight and was brought out of the well. He returned to his gurudeva and fell at his lotus feet, explaining all that had happened. The ācārya was so pleased that he blessed Upamanyu: “You have passed the examination,” he said. “Now, all the Vedas and dharma-śāstraswill forever remain on the path of your memory and you will attain supreme auspiciousness.”

This narration from the Mahābhārata provides us with an example of the ideal guru-sevaka. The real guru-sevaka will never personally enjoy any object belonging to his guru. Service alone is his nitya-dharma, oreternal, constitutional function. However severe and intense śrī guru’s instructions may be, the true guru-sevaka contentedlyfollows them without deviation. While serving his guru, such a disciple forgets his personal happiness. Indeed, he will even gladly sacrifice his very life to serve his guru. The true guru-sevaka thinks as follows:

The disciple who follows his guru’s orders and teachings, rather than imitating his actions and practices, will never be deprived of his guru’s mercy. Rather than taking the Āṣvinī Kumāra’s advice to imitate the actions of his guru, Upamanyu followed his guru’s order. He refused to eat the healing cake without his guru’spermission.

An intelligent person knows to follow the orders and teachings (vāṇī) of great personalities. By this alone, all of his most cherished spiritual desires are fulfilled. None but those who perform service to śrī guru with this mentality can pass even the most difficult test the world puts them through. All the deep and secret truths of the scriptures manifest in their hearts alone and remain situated on the path of their memory forever! Solely by the mercy of śrī gurudeva, the highest auspiciousness – service to Śrī Kṛṣṇa – will be obtained.

Translated by the Rays of The Harmonist team
from Upākhyāne Upadeśa