The Nature of True Devotees 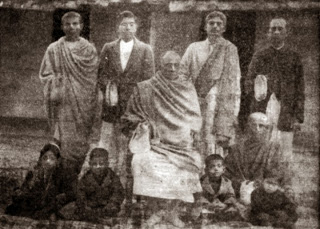 Devotion to God is attained by associating with those who serve both Him and His devotees. They have made service to God the very essence of their life. They have made the narrations of the names, appearance, attributes and sports of God the mainstay of their existence and they are always engaged in discoursing about them.

Not only is there a great difference between how the common man deliberates upon God and how the devotee deliberates upon Him, but the very natures of these two kinds of deliberation are quite opposite. Among the common people, many are inclined to worship God, whom they know to be the giver of mundane and celestial pleasure and happiness. Those who are more intelligent however – that is, those who outwardly present themselves as renunciants but remain the topmost enjoyers at heart – pretend to worship God with the purpose of becoming equal to God, who is the Supreme Enjoyer, and merging in Him.

Those situated midway between these two classes worship God with the intention of acquiring the eight modes of supernatural power, such as the power to become smaller than an atom and the power to become weightless, in order to fulfil their own desires. Although they pretentiously show themselves to be worshippers of God, they never admit the eternality of God’s names, appearance and so forth. They regard the Supreme Master of all to be governed by karma. These so-called worshippers do not serve God with the particular aim of serving and pleasing Him. On the contrary, they make the Lord serve them.

The nature of true devotees is different from theirs. They do not expect, nor do they regard as necessary, the attainment of pleasure for the body and home in this world or in the next. Nor do they regard as important the attainment of emancipation, which is so highly praised as the ultimate attainment for man. True devotees serve God by their very nature, by every thought and by every sentiment of their heart. This strong propensity in them does not yield to any obstruction but runs with impetuosity, forcibly removing all the obstacles before it. It is just like the swift and turbulent current of the river Ganga, which rapidly runs towards the sea inundating all high and low resistance, undergoing no disaster and never abating, at any point, to take rest.

The devotees are ever engaged in the service of God. No tendency towards anything else, no other thought or deed besides that service, finds any opportunity to cast its shadow over the souls of those bhakti-yogīs, who are incessantly communing with God and are entirely dedicated to Him. Out of pure love, the devoted servitors of God are ever engaged in offering service to Him and to His devotees. They have no vitality to devote to their bodies; to those who are related to their bodies like their wives or sons; to their home; to all those who are related to these; to domestic beasts and birds; or to their occupation, class and so forth.

Having fallen in love with the Lord of their life, who is the very life of their lives and the life of all, they have surrendered themselves to Him, with all their energy. Such devotees, dedicating their very selves to God, have made Him alone the quintessence of all their ambitions. And He, too, having been arrested by their devotion, has made them His essential companions, even though He Himself is the most essential Being for all.

Adapted from The Gaudiya Volume 25, Number 5
by the Rays of The Harmonist team

← Circumambulation of Sree Nabadwipdham Only and only the authentic source of Hari-kathā  can save us from Maya, nothing else. →