The Secret of the Destruction of Devaki’s Six Unborn Children 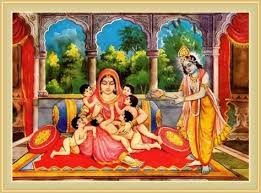 In the book Sri Hari-vamsa (2nd chapter of the Visnu-parva) it is written that Hamsa, Suvikrama, Kratha, Damana, Ripu-mardana and Krodha-hanta, who are known as the sad-garbha (six unborn children), are the sons of the demon Kalanemi. They performed intense austerities to worship the universal grandsire Brahma, unbeknown to their own grandfather Hiranyakasipu. Brahma, being satisfied with their extreme penances, granted them the boon of protection from death according to their prayers. Later, when Hiranyakasipu heard about this incident, he became enraged and said, “You have worshipped Brahma without letting me know, thus I have no affection for impudent people such as you. Your father himself will kill all of you. In your next life all six of you will take birth in the womb of Devaki and your father Kalanemi will be born as Kamsa. That very Kamsa will be your murderer.” Due to this curse of Hiranyakasipu they took birth in the womb of Devaki and were killed by Kamsa, the incarnation of Kalanemi.

Prior to this, they were well known by the names Smara etc. and were the sons of Marici Muni. They laughed after seeing the universal grandsire Brahma running after his own daughter. Due to this offence of looking down on a great personality, they had to take birth as demons.

In the Srimad Bhagavata (10.85.47-57) it is mentioned that due to the prayer of Mother Devaki, Sri Rama and Sri Krsna brought back her six dead sons from Sri Baliraja’s Sutala-puri:

This means that after going to Sutala-puri Sri Krsna told Bali, the king of the Daityas, “O lord of the Daityas, during the manvantara of Svayambhuva, six demigod-like sons were born in the womb of Urna-devi, the wife of Maharsi Marici. Seeing Brahma running after his own daughter (namely Sarasvati) they mocked him. As a result of this sin – hiranyakasipu saksat kalanemi-ksetre – they took demoniac births as the sons of Kalanemi who was the son of Hiranyakasipu. Again from there they were forced to take birth in the womb of Devaki through Yogamaya and killed by Kamsa. Mother Devaki is mourning for them, considering them to be her own sons. Presently they are residing in your abode. To alleviate her maternal sorrow I will take them away from this place to meet their mother. Finally, they will go back to the planets of the demigods having been freed from their curse and from lamentation. These six sons of Marici namely Smara, Udgitha, Parisvanga, Patanga, Ksudrabhrta and Ghrni will eventually attain the Supreme Abode by My mercy.”

Now, if we go back to the aforementioned incident, a question arises,” How is it possible that six mundane children could enter the womb of Mother Devaki, who is the personification of pure goodness (suddha-sattva), who manifests the Supreme Lord and is the embodiment of the greatest potency?”

In this regard Srila Visvanatha Cakravarti Thakura refers to the previous incident and himself concludes:

Although the entire expanse of the material world is situated within Sri Bhagavan, who is the very personification of truth and pure goodness, still it is separate in existence – it is not directly connected to Him. Similarly the entrance of the six children into the womb of Devaki should also be considered in that manner.” Bhagavan says in the Gita:

It cannot be harmonized by the intelligence of ordinary jivas. To display the fullness and completeness of bhakti, all these inconceivable pastimes of Sri Bhagavan are manifested. Therefore, the real significance of this is – the symptoms of devotion such as sravana, kirtana etc. reside within the devotees. Within that womb based on its fruitive results are the six desires of material enjoyment that are its companions (the five knowledge-acquiring senses and the mental faculty). “Alas, all these will drag me into the dark well of material life”– when such fear arises in the heart of a devotee, the desire for material enjoyment will be vanquished in time, then the glories of the Lord, namely the devotional cultivation of hearing and chanting, attains immense maturity. Only at that stage of mature devotion will Bhagavan with His form, quality and pastimes appear. Bhakti is the personification of pure goodness and reveals the Supreme Lord. Even the words of the sruti support this – bhaktir-evainam darsayati etc. meaning that only devotion can reveal Bhagavan. Because the sruti states that, ‘Marici manifests from the mind’ we may take it that Marici is an incarnation of the mind. Marici has six sons; hence they are the six sense objects of mental enjoyment (sound, touch, form, taste, smell and thought). Since Sri Bhagavan appears from Devaki she is considered the avatara of bhakti – the very personification of devotion. Because the sruti states, bhayat kamsah (‘the fear within Kamsa’), Kamsa is the personification of fearfulness, hence Kamsa is the avatara of fear. Therefore, just as fear of the material world destroys the six material sense objects from the womb of bhakti, similarly Kamsa kills the six children of Devaki. The well-wishing mother of prema-bhakti arises along with the glories of the Supreme Lord within the womb of devotion when material desires are extinguished Similarly, when the six sons of Devaki are eliminated, one should know that the seventh child appears as Anantadeva, who manifests as the abode, the resting place and the paraphernalia such as the bed, umbrella etc. of the Supreme Lord. Just as the Supreme Lord Himself appears after the appearance of prema-bhakti, so Sri Bhagavan directly appears as the eighth son of Devaki. This is the purport of the appearance of the Supreme Lord within the womb of Devaki.

“Sri Krsna, who resides within everyone’s heart and is the benefactor of the truthful devotee, cleanses the desires for material enjoyment from the heart of that devotee who has developed the urge to hear His messages, which are in themselves virtuous when properly heard and chanted.” (Bhag. 1.2.17)

“By regularly serving the Bhagavata, all that is troublesome to the heart is almost completely destroyed, and devotion unto the Supreme Lord, who is praised with choice verses, is fully established.” (Bhag. 1.2.18)

“At that time, one is not affected by the modes of passion and ignorance, such as lust and greed. Then the mind is established in goodness, and becomes fully satisfied.” (Bhag. 1.2.19)

“Thus, the man enlivened by devotion to the Lord is freed from material association, and comes to know realise the truth concerning of the Supreme.” (Bhag. 1.2.20)

If we discuss all these verses we come to know this – through the auspicious process of chanting and hearing, Krsna, the well-wishing friend of the devotees, enters the heart of those who hear His name, form, qualities and pastimes and eliminates all mundane desires of material enjoyment that are present as sin within the heart. Under the care of the devotee bhagavata and regularly hearing the book Bhagavata from the mouth of that devotee, anarthas are eliminated in time. At that stage steady devotion (nistha), devoid of any mental disturbance, arises towards the Supreme Lord Sri Krsna, who is glorified by select verses. Then mental disturbances arising out of the modes of passion and ignorance and obstacles to bhajana such as lust, anger, greed, illusion, madness, envy etc. are eradicated with the manifestation of taste towards hearing topics about Krsna and other devotional activities. Under the growing influence of the mode of goodness, the realisation of the living entity continuously increases, and in the association of saintly personalities, continuously cultivating Krsna consciousness leads to attraction towards the Supreme Lord, the personification of pure goodness. His mind attains satisfaction when it becomes fixed in pure goodness. In this way by the influence of bhagavata-bhajana (worship of the Bhagavata), the consciousness becomes content mukta-sanga means that the sadhaka, being free of material desires such as lust etc. realises the truth concerning the Bhagavata or meets the Bhagavata directly. With intense attachment, if one performs krsna-bhajana at every moment, then the influence of krsna–bhajana-rati (a taste or inclination towards Krsna) arises within him and his mind becomes free from the influence of matter and achieves real satisfaction. After this, prema-bhakti gradually increases until prema reaches maturity when one feels or realises the personal qualities, pastimes, opulence and sweetness of the reality of the Supreme Lord. This realisation or feeling has been called saksatkara by Srila Jiva Gosvamipada, referring to the Bhagavata sloka (1.2.7):

“By rendering devotional service unto the Supreme Lord Vasudeva one immediately acquires causeless knowledge and detachment from the world.”

Devotional renunciation and the causeless attainment of knowledge mentioned here are in tandem with the aforementioned Bhagavatam verse (1.2.20). Mukta-sangasya means the renunciation and realisation concerning the truth of the Supreme that results from coming directly in connection with the Supreme Lord. When attachment arises towards Bhagavan, the mind is free from the influence of material desires. Until one develops distaste towards material things, realisation concerning the truth about the Lord, or directly experiencing His presence is not possible. Sri Krsna’s appearance does not become the subject of realisation in the heart. Without understanding the appearance of Krsna, the life of the living entity is in vain.

“For one who remembers the lotus feet of Krsna, all inauspiciousness soon disappears, and one’s good fortune expands. In other words, one becomes free from all material contamination, one attains liberation from repeated birth and death, and one’s real spiritual life begins. As one’s heart becomes gradually purified, one’s devotion for the Lord within the heart awakens, and one realises the Paramatma. Thus one gradually develops knowledge, realisation and renunciation” (Bhag. 12.12.55)

In this sloka of Sri Bhagavata the same meaning is also repeated. Therefore:

“The only thing required is chanting the holy name of Krsna in the association of saintly devotees. By worshipping continuously, one obtains the lotus feet of Krsna.”

Srila Narottama Thakura Mahasaya has sang this prayer in the beginning of his Prarthana:

“When will Nitai-canda show His mercy to me? When will I feel the desire for material life to be insignificant? When will my mind be purified by rejecting material thing? When will I be able to see Sri Vrndavana?”

This prayer has been sung thus. Sri Baladeva is the very personification of the sandhini-sakti that expands spiritual consciousness everywhere. Being non-different from his personal manifestation, in the form of Sri Guru, He delivers the message of Krsna for the aural reception of the living entities to purify their consciousness and free them from material contamination. Until this happens, the living entity will not develop eagerness to have darsana of the spiritual Vrndavana-dhama and the lotus feet of Krsna, the master of the dhama.

“By the water of the mercy of Sri Guru I am able to extinguish the fire of material existence.’ (Gitavali 5.2)

“The blazing fire of material existence is burning the heart, and that fire is always increasing. If one associates with saintly persons and performs bhajana of Hari, then such activities act like water and extinguishes that fire.”

The sermons of pure devotional principles coming forth from the mouth of Sri Guru will extinguish the fire of material existence and simultaneously urge the core of the heart to cry out, “Where is my Vrndavana? Where are the lotus feet of Radhika? Where is the treasure of the life of Radha, the life of the gopikas, Syamasundara, the son of Yasoda?” When the mind is still contaminated by the filth of material desires, this intense cry does not arise in the heart.

Until and unless we start crying like this – with intense hankering, with tears in our eyes and under the shelter of Sriman Mahaprabhu who is in the mood of vipralambha:

– then we cannot get Him. Bhaktasya bhajanottha srantis tad-darsanottha krsna-krpa – without the combination of the devotees personal effort and the Lord’s mercy, the rope that binds Him will always be two fingers too short.

Guru-kripa hi kevalam (Only the mercy of Sri Guru can make it possible).